What happens when we scrap pre-production, production, post-production instead focusing on process alone? I am going to discuss process-based experimental techniques as productive strategies to make moving image works.

Why have I proposed this discussion for the screen production education and research community? The first reason is that you teach. I have used this process-only approach productively in my sporadic teaching activity.The second reason is research and re-enactment, one of the three strategies, is intrinsic to my PhD.

The film industry talk about pre, prod and post as a process. Workflow strikes me as a better word for pre, prod and post, focused as it is on pre-conception, execution and delivery of a product. This thinking relies upon a pretty clear idea of what you want to achieve before you start and built into this pre-visualisation is a preconception of what success will look like. Of course, happy accidents occur and conversely, and things don’t turn out as planned but in essence, the work is laid out before you begin.

My provocation is that there is much to be gained in a learning situation if the emphasis is on the learning process as an end in itself. Now I am not a professional educator. I’m making this statement from observations of myself at work and watching others in learning environments I’ve set up – my fairly frequent guest lectures and workshops. 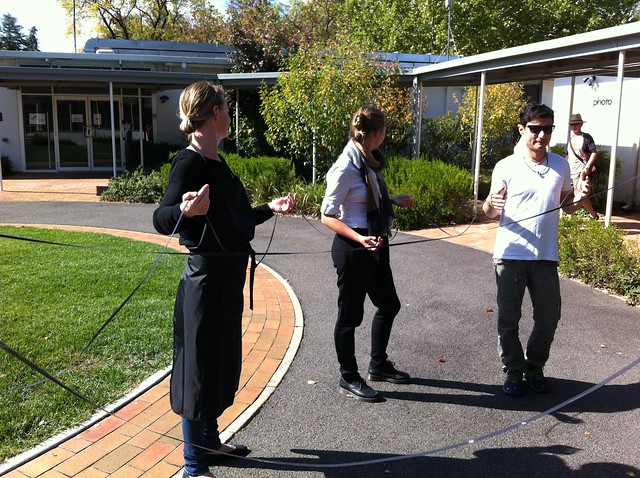 Intentional Malfunction workshop participants dry their hand processed super 8 outside PhotoAccess, Manuka. Another image of this workshop heads up this post.

In this model, the task is to take up the camera and see what happens. Also important in this model is iteration, letting the ideas emerge informed by the experience gained from these iterations.

How have these thoughts evolved for me?

In short, this thinking that embraces process mirrors my own working approach.

I am a graduate of VCA School of Film & TV from the early ’90s. My work over two decades has moved from narrative to abstract. I once wanted to be Jane Campion, in the early 90s I got involved in dance on film and kept going with that for a few years along side a producer role in advertising and then I found direct film. So my screen work/s move from emphasising output to a focus on process. [Slide of 3 stills of LC work]

But it’s all very well for me to say take up the camera and see what happens. This still requires decisions – what will I shoot? Where will I start?

In my work, I overcome this problem of how to begin using three strategies: material algorithms, incompletion and re-enactment. These may seem obscure right now but I will use the rest of the talk to work them through.

These strategies effectively work as scripts, they give me a structure and a framework to guide my process, allowing me to ‘follow my nose’ in a productive way. One is tried and true – material algorithms have been guiding experimental film for decades.

So what do I mean by material algorithm? I mean is I am thinking of the technology as effectively a set of rules and rigours. In my case, I am particularly interested in obsolete film processes, mostly super 8, sometimes 16mm. The rules and rigours ie algorithm of the camera means the stock goes in here and the light enters here, you run the algorithm of the film camera by loading stock, maybe adjusting settings for light and shooting the stock.

So my task is to run the algorithm to find out what this particular piece of obsolete equipment can uniquely do.

Here are two examples of ‘running the algorithm’ with obsolete super 8 cameras.

I have a set of super 8 cameras. Each one has a different kind of error. One has a shutter problem that creates a jump in the frame.

When I find properties like these, I can return to them, iterate with them to make works that specifically use them.

I hear you thinking how is this any different to just telling the kids to get to know their equipment? I suggest it is an invitation to them to think about the equipment itself as generative. What’s important here is that if the algorithm means the rules and rigours, these rules and rigours can extend out past just the technical equipment. Does the algorithm include you as the camera operator? Does it include your audience? How you start to think about it becomes porous.

How do I propose you do this with your Sony X7s? Well maybe you have to ask them to do this just with their mobile phones and maybe the property they’re going to uncover is camera shake. And then maybe the algorithm extends to remediation and what they do with their stuff on Instagram or Vimeo. So it’s an invitation to extend material thinking into the cinematic situation as well as to apply it to the hardware. In my work, I apply this thinking through the whole chain, the camera, the film processing, the projection and the audience experience.

So we have discussed the first of the three strategies, material algorithm. Now we turn to the second strategy, incompletion. Rather than completed works that circulate alone in the world, I produce fragments that I project live, often in collaboration with other artists such as musicians.

Early on in this talk, I spoke about the potential paralysis for the newcomer about the status of their idea that full pre-visualisation invites – is it good? How good is it? Very good, good enough, not very good. We all operate with the internal critic in different ways and to differing levels of paralysis. One way to get around this is to look upon incompletion as a device to encourage suspension of judgement. An alternative word for incompletion is fragment and this implies something more positive, something saved, something kept carefully, something that reflects a wider whole, a potential.

The fragment also allows for the re-combine. This has been a very generative strategy for me. I constantly mine my own archive. This image shows my earliest super 8 films literally ‘archived’ within my earliest 16mm film. You can read about this project here. 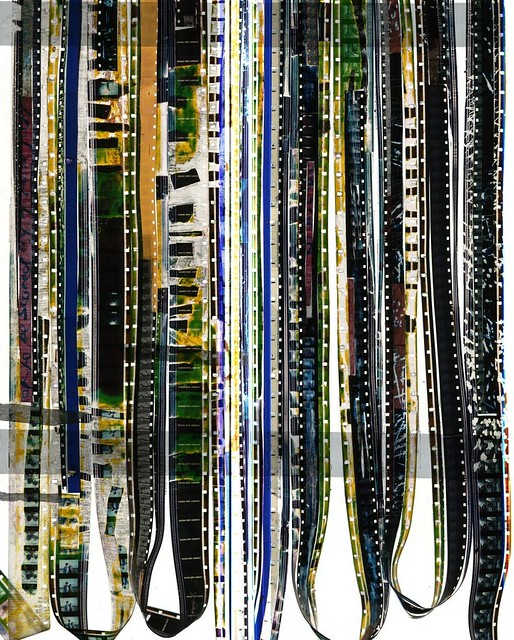 And my live projection work

often includes material I have been working with for the past decade. I have repurposed my own content as single channel works, multi screen installations, graphic scores and constantly in live performance. I’m able to do this because none of this work has been ‘published’ as such, not in a sense that rules it out for re-use.

So while incompletion doesn’t itself generate images, it’s a productive framework that treats each fragment as an end itself.

My third strategy is re-enactment. Working in the Australian artist/filmmaker collaboration Teaching and Learning Cinema, we make anew Expanded Cinema works from the 1960s and ‘70s. Expanded Cinema broke the projected image out beyond the screen. A recent book by American scholar Andrew Uroskie has a neat description: these works explore the situation of cinema. In my MFA, I called it expanded cinema works that explored the event of cinema: the screen and the projection, the audience’s experience in a particular time and place, the mechanics and equipment as well as what is in the image. It invites a looking at and lokking through. It can be seen as a precursor to new media art and immersive installation art. Here are four examples we will race through.

My colleague Lucas Ihlein and I outlined these works in our paper to the Australian Society of Archivists in 2015. From that paper:

American techno-utopianist Stan Vanderbeek is best known for his Movie Drome (1963–66), a geodesic dome structure whose interior housed multiple simultaneous 16 mm film and slide projections, to be viewed by an audience lying flat on the floor. Vanderbeek hoped to make a new kind of visual media literacy. As he wrote, “each member of the audience will build his own references and realizations from the image-flow”, (Vanderbeek 1966).

Japanese composer and artist Takehisa Kosugi created Film & Film #4 in 1965. In this piece there is a paper screen and a film-less projector. A performing cuts around the screen until the sheet of paper falls away showing the rear wall behind. Film & Film #4 is typical of a range of Expanded Cinema pieces by different artists from the period that cut, penetrate, or otherwise violate the screen surface (Renan 1967, p. 247).

Tapp und Tast-Kino was a miniature cinema consisting of a cardboard box strapped to the artist’s bare torso. Audience members were invited by her collaborator Peter Weibel, spruiking with a loud hailer, to “visit” the cinema one at a time, by reaching through the curtains. The work is often described as a critique of the fundamentally voyeuristic conditions of cinematic viewing (Mueller 1994, p. 15).

Projects that we have interrogated indepth are Anthony McCall’s Long Film for Ambient Light (1975), Guy Sherwin’s Man With Mirror (1976) and Malcolm Le Grice’s  Horror Film 1 (1971). Our progress on these projects is recorded on our blog.

Our approach has been one of ‘mapping’ these works from the past onto ourselves and emphasising where that mapping breaks down. Our new works are neither identical to the original works yet nor are they unrecognisable, they are both old and new at the same time.

For me as a screen practitioner, I have gained much from re-enactment. It has allowed me to experience seminal works by other artists through my own body, by actually doing them. It has given me a concrete relationship to these works. In one sense, they have behaved like ‘scales’ for a musician, a way of practicing or stretching one’s self to map other people’s work onto my own body. Here is an example: Man with Mirror. The commentary from Guy and others about this work mention age, that Guy who still performs the work is no longer late 20s as he was when he shot it describes it, , they mention the tension between the live performer and the filmed performer.

In this work the choreography explores the picture plane, at first flat, then pan, then tilt. For a filmmaker, well for me I should say, I read this as a meditation on the picture plane and the work of the camera in breaking in to the picture plane. Now this is visible in the work but it’s not something that I reflected upon at all until I actually started to experience the work for myself as a re-enactment. This may seem trivial but of course this kind of body to body transmission of knowledge becomes part of my ‘body of knowledge’, my ‘indwelling’ as Michael Polanyi describes it. And while I can’t measure or point to a concrete impact in my own practice, I know my decades long interrogation of the picture plane is now informed by it.

Each year for a number of years now, TLC has given a guest lecture to UOW media arts students ahead of them carrying out their own re-enactment projects.

Students at work in 2013 in Meda201, Media Art at the University of Wollongong, course convened by Dr Jo Law. Image: Jo Law.

Tasking the students with re-enactment has proved highly effective for convenor Dr Jo Law. The students are given quite clear parameters about the re-enactment and the parameters are broad, something more off the cuff than the patient observation of the rules and rigours TLC strives for. But what it seems to do is to scaffold the students very successfully by giving them a frame through the algorithm of the work, and some obvious points of difference usually to do with format, so they must think again about the work and an obvious reason for why they must talk about the choices they make.

So these three strategies are productive in my own practice. This paper concludes with a provocation, can these be productive in screen production more widely?

This site uses Akismet to reduce spam. Learn how your comment data is processed.